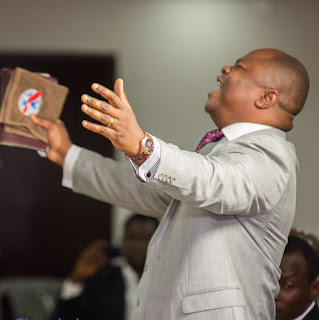 (Part 4/4) Three years after I accepted Jesus, I wrote my first book which was a surprise to many people because they knew that I didn’t go to school. When I told people and even some religious pastors that I was going to write a book, they were like, “No. You should be talking about going back to school. What do you want to write?” I wrote my 2nd book after the first one titled, “How to Succeed Beyond School and Work” because at that time, I had started a company and in less than 6 months had attracted over 80 clients. I wasn’t only saved by grace, but was also empowered by grace. I started the company because I had knowledge of graphic design. The Holy Spirit taught me how to use graphic software. I’d never read anything about graphic design or the use of the application. So I started designing. It later grew to be a publishing house not only in Lagos but Nigeria as a whole.

I’ve had the privilege of doing a few courses abroad but still don’t have a degree. The highest I have in education apart from professional training is a higher diploma from a college in the United Kingdom and I finished with distinctions. But today to the glory of God, I have had the privilege of training top executives including CEOs, Professors and Chancellors. I don’t only have a company in the UK, I also co-founded one in the US. I recently started recording my TV show and have written several other books. There’s just this dimension of grace. I’m a consultant, for both faith and non-faith based organisations. I also travel the world as a minister of the gospel and oversee several churches, with one in the UK. I am married to the most amazing woman – Busola Adun – both inside and out.