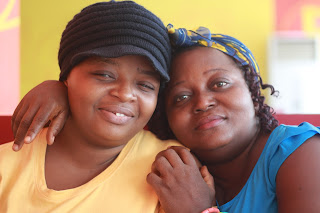 After my SSCE in 2014, I fell sick.
Our family doctor noticed a growth on the front part of my head and my family was referred to Lagos State Teaching Hospital (LASUTH) to see a neurosurgeon.
A CT scan was done, and the scan showed that I had a brain tumour. I soon had a convulsion and was rushed to the hospital. I was placed on a drug that would sustain me until the time of my surgery.
On the 8th of April 2014, I had my surgery. It lasted for 2 days because of a complication. I lost a lot of blood. My survival was 50/50, but I got better.
I was placed in the ICU for a week. The doctor asked me different questions like if I knew my name and where I was. I answered all the questions correctly because all my senses were intact except for my sight. I had gone blind. The surgery affected my eyesight. I was in the hospital for close to 2 months. The doctors couldn’t tell what happened exactly. They tried all they could, then said nothing could be done about my eyes.
I could no longer do things by myself or go out alone. After 2 years, my family wad directed to an Indian hospital in Lekki called Vedic Lifecare Hospital. They did an MRI scan and it was discovered that there was a mistake during the first surgery that affected the optic nerve – the nerve connecting my eyes to my brain. They said they would need to carry out a corrective surgery at the headquarters in Manipal, India.
My bill is about 6 Million Naira for the flight, the hospital bills and hotel lodging after the surgery because I would have to stay as an outpatient for 2 weeks before returning to Nigeria. My family has been reaching out to people since November 2016: family, friends, and the public. I’m still hoping and looking up to God that there will be a way.
April 8th, 2017 will make it 3 years since I’ve been blind. Nothing that has happened has affected my faith in God; rather it has strengthened me even more. I know everything will be fine someday.
—-
To support Chidera, kindly contact:
Raquel Jacobs: 08025857485
Chidera’s mum: 07033233946